Q: There’s a lot of ground to cover when presenting street art as a movement. On what does the exhibition focus on?

The exhibition focuses on new technologies that are used in street art today. To understand that there is a strong story arc that traces the birth and fifty years of street art history. We want to make people understand that this is not a new movement or a fashion. This is a strong and real art movement and we wanted to point that out in presenting the new ways it is being made.

Q: Do you make a distinction between graffiti and street art?

A: Not at all! To me, and for the majority of people today, the term street art is a ‘trash’ word. When they use it they put many, many different things in it. In its beginnings street art was tags and graffiti, mostly in the USA. Then around ’92 came the stickers and after that something new, and then something new again… it’s hard to exactly pinpoint when a new technique had started to be used in street art, but we can say with certainty that graffiti and tags were the seeds of the movement. But street art is something that is growing organically by people who decide they want to be street artists, that they want to do something for free on the street and offer their creativity to the world without any money or feedback wanted. Well, maybe some do it for the notoriety that they can later transform into money. For the most part, when artists start doing street art they have a ‘this is what I am doing and I want the world to see it’ mentality. Street art is a big word today and people are giving it new meanings every day, but graffiti, they were the beginning. 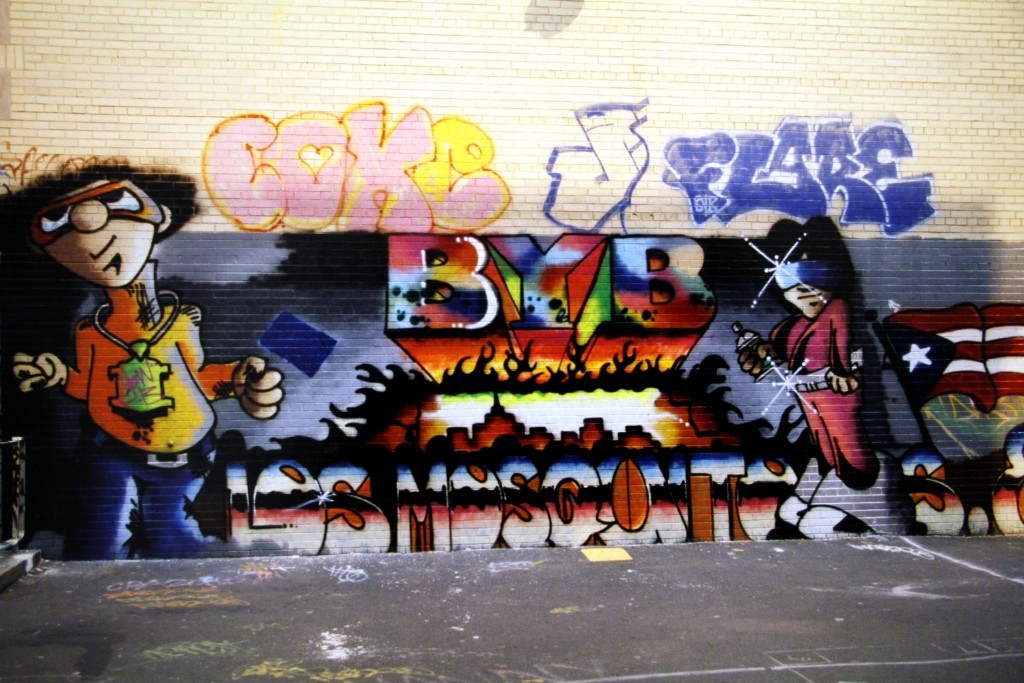 Q: If, as You said, street art is a way of expressing yourself outside of institutional means of presenting your work, i.e. the street, does presenting it in galleries make it lose that sense of freedom or does it legitimize it as an art form?

A: Street art does not lose anything by being shown in galleries and it does legitimize it. First street artist were just tagging back in ’69. Hugo Martinez, a philosophy mayor at City Collage, New York at the time noticed that these kids were writing their names and the streets where they lived everywhere they went. On the walls, in the trains when going to school in the morning… It was possible back then because New York was on the edge of bankruptcy and there was no one to clean it, no police to stop them. So Martinez argued that those kids were doing the exact same thing kids today are doing digitally, posting their names, their lives on digital ‘walls’, screaming ‘I am alive, I exist and I am here now and I can do whatever I want!’ That was just an expression of youth. So in 72′ Hugo Martinez organized an exhibition of those tags at his collage, and had later opened a gallery in efforts to sell those works. Those writers, they were poor kids that had to steal spray cans, do shady stuff to afford doing what the loved, expressing themselves, and then someone comes and asks them if they want to go into galleries, if they want to sell their work. They all said ‘yes’! All of a sudden someone had proposed to them the idea of being an artist, something they have not thought about, and that the can earn money doing this, sell their work.
There are some fantastic pieces exhibited in the historical part of the exhibition that, for a long time, were not considered a part of the street art movement, but today they are viewed as godfathers of it. They were in the galleries willingly. It does not matter if you consider yourself a graffiti or street artists, if someone proposes you earn money by doing something you are passionate about so you can continue doing that, you will say yes. There are some street artists who say that you change the meaning of the art if you put it in a gallery, but this is the biggest bulls**t ever. People saying that are just not at the level or have no interest from the public to be in a gallery. 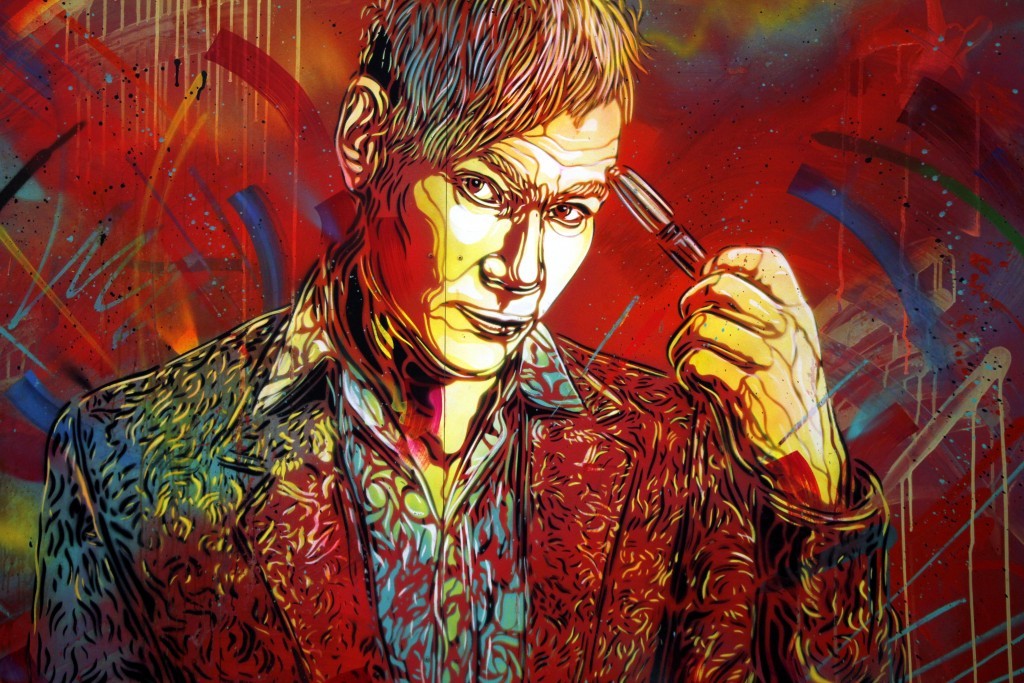 Q: On what does the exhibition focus on? Is it mostly western art or does it go broader? How far does it go into history?

A: Before the beginning of street art there have been paintings on walls. From Cueva de la Manos and their hand paintings thousands of years ago people have been using walls to express themselves and to provide a message. What happened in the revolution in Mexico in 1917? When the population that could not read needed to be educated they went to the marketplace and asked painters to paint murals on the walls. The movement came from there, from Muralism, and it spread from Mexico south and north until it came to San Francisco.
Mission District area there is the most famous example of Muralism today, the heritage those immigrants left on the walls. The Mexican revolution was also the beginning of communism and their propaganda movements. It needed to change the mind of the person in  a really strong and fast way. So they started to produce graphics, millions of them and they plastered them on walls. The walls started to speak to the people. Before, there was nothing on the wall. So this concept started to arise in 1917 Mexico and 1920 Russia. After the revolutions people still placed their work on walls, there were no museums or mass media. That is how your work got seen. Then, in the sixties, the youth culture started in the west where young people rebelled against some 65+ guys dictating their lives. They started to put paroles on walls as a way to differentiate themselves from the old culture, as a political statement.  In their wake came the street art as a movement we know today. So where do you pinpoint when it started exactly? We cover those periods in the exhibition as well. 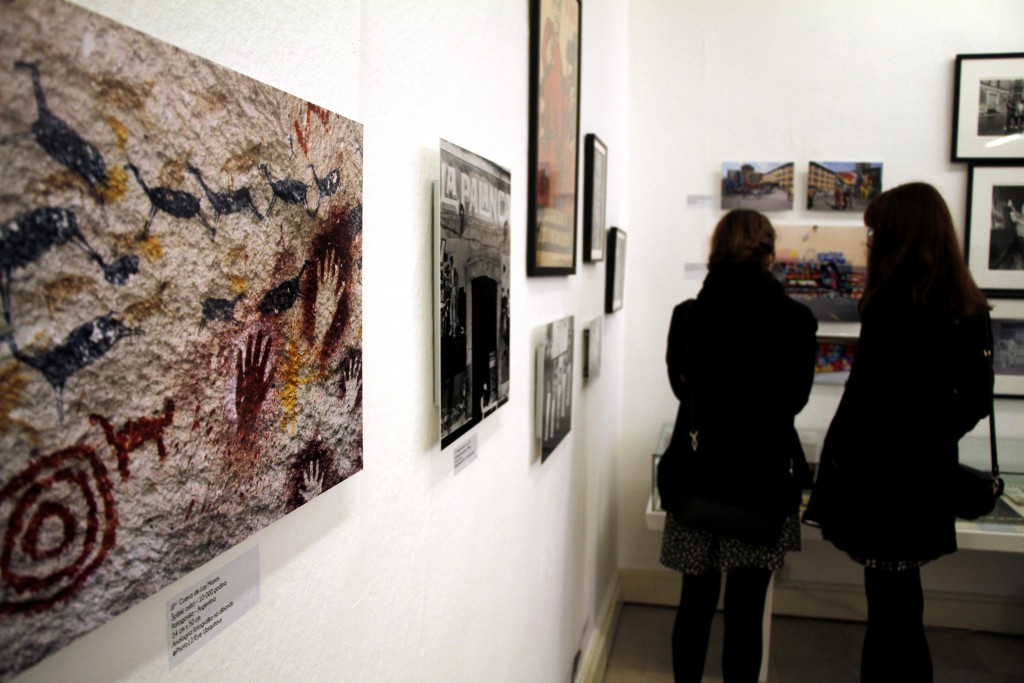 Q: Why did street art become so popular in the last couple of years?

A: Street art is a popular movement in itself. This is the first time that a cultural movement is coming from the bottom, not from the top. Before the street art movement, even in contemporary art, there has always been a group of some twenty people who decided ‘it’s going to be this artist and this artist’ because they had access to the best locations in the world to present this art. They had access because they were funding them and they made money out of them. It’s crazy but that is how it works. It’s a pyramid going from the top to the bottom. First you’ve got the exhibition, then publications, then TV and books. On the other side, street art movement came from people on the ground level doing what they want and posting it on the internet. Street art is the first art that optimized the internet to its full potential in reaching out to people. That makes a big difference. Today street art is super popular. Every old person knows what street art is, they are ready to receive information, to learn, and they want to learn. Ten years ago graffiti and tag were in the same bowl, they were both considered vandalism.
Today, if you ask anybody they will say that tag is vandalism and graffiti can be art. Minds are changing, people are educated and have started to realize that graffiti is art. Maybe in fifty years tag will be considered as art, when we start talking about street calligraphy. It will be the same as graffiti. I am sure that if you don’t know Japanese calligraphy and are given two sets of it, on from a beginner and one from a master, you might not recognize which one is made by the master. There is craftsmanship and creativity in the tag. You can tell how much time was spent practicing the tag, how much work was put in it. Who is to say you can’t reach expert levels in tag in the same way as in calligraphy? There is art in everything.

A: People visiting the exhibition will be able to experience street art interactively trough three pieces. The first one if waterlight graffiti where you paint with a moist sponge or a brush on a led filled surface, where the led bulbs react to water and light up. This is the next level of graffiti and protection from vandalism. They’ve invented a concrete that is filled with optical fibers that can react to the light of your smart phones. You don’t even need to use water, you can paint with your phone. They are going to implement that concrete in Poitier, a small town in France, in 2016. You’ll be able to do watertight graffiti there on certain spots in town.
The second piece is Picturae, basically a big tablet you can use to digitally spray paint in any way you want on any surface you want. You have the spray in your hand but it uses a laser. Any street artist that tried it had their mind blown, the rendering is fantastic. The third piece is using QR codes to interact with the public and their hand held devices in real time.
That is the future of street art: interactivity. Well, at least one of the futures. Graffiti is not art that goes against new options and techniques, it embraces them without losing the old ways, it’s just something you put on top of everything. The movement will just become bigger. So interactivity is the next big step that will bring even more people to street art, it’s going to be easier to educate them also. We are surrounded by walls everywhere we are, inside and out. We should use those walls to create art. 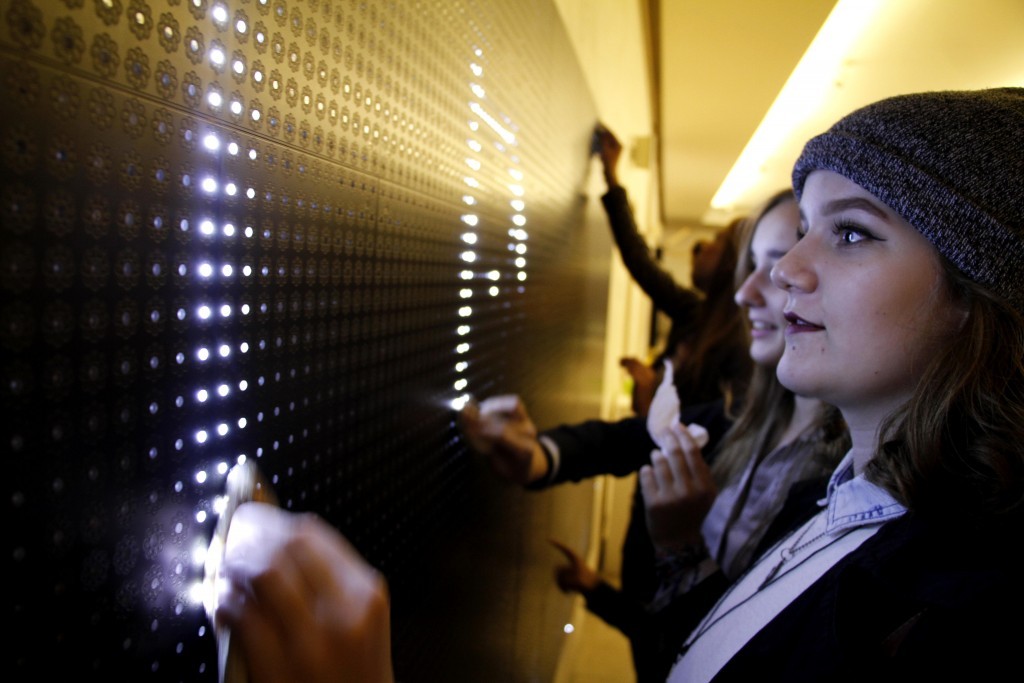 Street Art 2.0- Innovation in the heart of the movement will be opened in Klovicevi dvori gallery until November 29th 2015.