Kino Gric is host to the 1st Arab Film Festival being held from April 28th to May 1st.  Arab Film Festival is a project of Croatian Arab Friendship Society intended primarily to combat discrimination, racism, xenophobia and other forms of intolerance, as well as to provide an introduction to Arab culture and way of life as well as deconstruction of stereotypes formed on Arabs through other cinematographies. Furthermore, the organizations are striving to present Arab cinematography to the Croatian public and introduce it to the latest film achievements created in the Arabic-speaking countries.

During these four days, Kino Gric (Jurišićeva Street) will play films from Tunisia, Egypt, UAE and Palestine. Tickets for all screenings are free of charge, and Croatian Arab Friendship Society invites you to come and meet the Arab culture; to find more about Arab countries through their films, one of the most influential forms of art.

Croatian Arab Friendship Society was founded in 2012 aiming to address the issue of racial discrimination, promotion of a culture of non-violence and peace, as well as the promotion of intercultural dialogue and introduction and presentation of Arab and Croatian cultures, science, history, languages, gastronomy, natural beauties and tourism. Moreover, Croatian Arab Friendship Society is also involved in humanitarian work. The Society is continuously focused on establishing and promoting better relations in all the segments between the Republic of Croatia and Arab countries, as well as on the improvement of economic and cultural cooperation and fostering of friendly relations and dialogue with embassies of Arab countries in the Republic of Croatia. 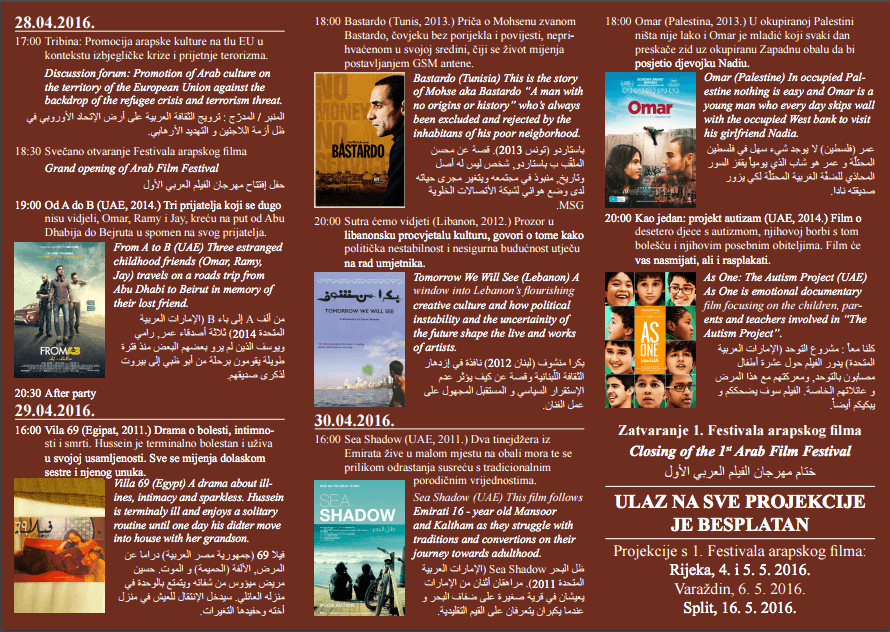