The opening of an independent exhibition of a young photographer Glorija Lizde will be held on Tuesday, September 4, at 8 pm, at the PM Gallery in Zagreb.

The artist will present herself to Zagreb public with a series of photographs “F20.5“, thanks to which she graduated from the Studio of Photography at the Academy of Dramatic Art in Zagreb and was awarded Deans’ award. Glorija Lizde’s photography work explores themes such as family relationships, memory and identity and this series is not an exception.

In the artist statement Lizde explains: “The work F20.5 depicts the confrontation of my own childhood, during which my father suffered from residual schizophrenia. Through the reconstruction of my own past and reinterpretation of father’s visual hallucinations, I am staging situations in which I place myself and my twin sisters in order to acknowledge and show the influence the illness had on the entire family.” 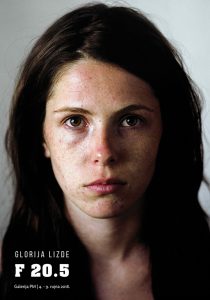 Before plunging into past moments, the author carries out extensive research on her father’s illness, which marked the growing up of his three daughters. The illness is referred to as F20.5, a cold medical code for residual schizophrenia.

Glorija Lizde is a young artist born in 1991 but she has already had two solo exhibitions and has also participated in several group exhibitions in Croatia and abroad such as Being/Seeing (QUAD Gallery, UK), Parallel Intersection Lisboa, State Abed (Gallery of Fine Art Split), Rovinj Photodays 2016 (Museum of Arts and Crafts Zagreb).

The exhibitions stays open until 9 September.