One of the World’s most popular travel guides, Lonely Planet released the prestigious “Best in Travel 2019” guide, which contains recommendations on destinations to be visited in 2019. One of the cities you have to visit in 2019, according to Lonely Planet, is Croatian coastal town Zadar.

“Zadar has risen from the ashes of its war-ridden past and blossomed into a spirited cosmopolitan city. Wander through the Old Town’s warren of bright marble streets to discover cool bars and laidback cafes, ancient Roman ruins, innovative museums and rustic, trattoria-style restaurants” the Lonely Planet writes. They’ve also mentioned Zadar’s Sea Organ and called it ‘magical’ as well as Zadar’s second most popular sight the Sun Salutation. 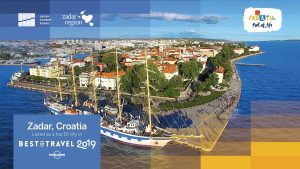 Kristjan Staničić, the director of the Croatian Tourist Board congratulated Zadar and all those involved in it’s tourism sector and said: “The inclusion of Zadar on the list of the top city destinations for 2019 is a great recognition for Croatian tourism. It is also a confirmation of the quality Zadar offers and the great reputation Zadar enjoys in the World. In cooperation with local tourist communities, we intend to use this recommendation for the implementation of additional promotional activities aiming at an even stronger positioning of Zadar, the Zadar region and Croatia as a whole.”