For the first time in Croatia, the Art Pavilion in Zagreb is organizing an exhibition dedicated only to the female artists. The exhibition will be on display from the February 6 to April 12, 2020.

The fundamental idea behind the exhibition is that it should provide a historical and critical cross-section from the oeuvres of women visual artists who were at work in and left their mark on the cultural life of the city of Zagreb, in the period from the end of the 19th century until the present day. Within this quite large span of time, the generations of women artists will be presented in three large but historically logical units.

The first will cover generations that operated up to World War II, the second shows the generations who started their exhibition activity after World War II and produced the major parts of their works in the following decades, the third will present the cohorts that appeared on the scene at the beginning of the seventies and later, and most of whom are still at work today. 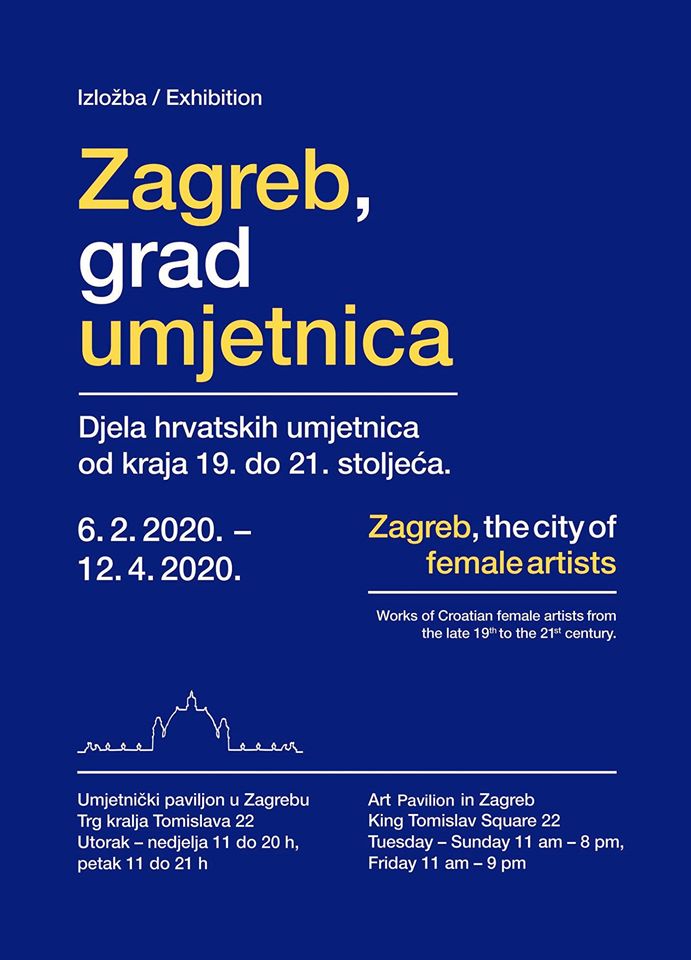 The first unit will present artistic phenomena from the period in which women did not have any kind of institutional education, but who with their oeuvres did participate in the general stylistic tendencies of the time, then, the first generations trained at the Zagreb College of Art and Fine Craft or elsewhere in Europe, who after World War I were to form the first Female Visual Artists Club or even their own schools of drawing, to the generations that came on the scene in the interwar period. The second unit will show artists who made their names in the art scene in the post-war period, making an essential contribution to the culture of high and late Modernism, but also going on with their work even later.

While, the third unit should present artists who started their work at the time of the breakdown of the high Modernist paradigm, who adopted new, neo-figurative, Pop Art, conceptual, performative and multimedial forms of artistic expression, and the Postmodernist, trans-avant-garde manifestations of New Geo and the New Image. This unit will also cover generations of artists who were to come to maturity by the beginning of the new millennium, their works being counted among contemporary art trends and authors from the area of art photography.

The exhibition will be mounted to mark Croatia’s presidency of the European Union, in the first half of 2020, and in honor of Zagreb, but the main intention of the exhibition is to draw attention to the changeable historical and artistic circumstances in which these women artists worked and within which they won space for their artistic testimony.